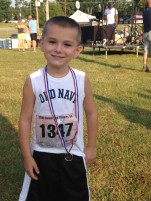 We are so proud that running has become part of our family (Thanks to Samantha)!  She now has Gavin interested and excited to run 5K’s with her.  Gavin ran his first 5k when he was 5 and has since ran 2 more!  He definitely is competitive like his mother and when he found out that other kids came in before him (he thought he won), he was not happy!  Well in all reality, he won them all!  The fact that at 5 he is running 5K’s instead of sitting and watching TV all day is a great accomplishment.  We are so proud of him and look forward to seeing him run and running with him!

Howl at the Moon 5K

This site uses Akismet to reduce spam. Learn how your comment data is processed.